How to use Angular Dynamic Forms in Ionic Applications

In this post, you will learn how to create Angular Dynamic Forms in Ionic apps based on metadata that describes them. At the end of this tutorial, we will present two Ionic pages as a working example which demonstrates two different form structures with the most commonly used fields. For this, we will:

Note: The complete source code of this tutorial is available in the ionic-dynamic-forms Github repository.

To follow along with this tutorial, you will need:

Open a terminal window and navigate to the supermodular2 local folder. Install the NodeJS dependencies:

or for a web preview: 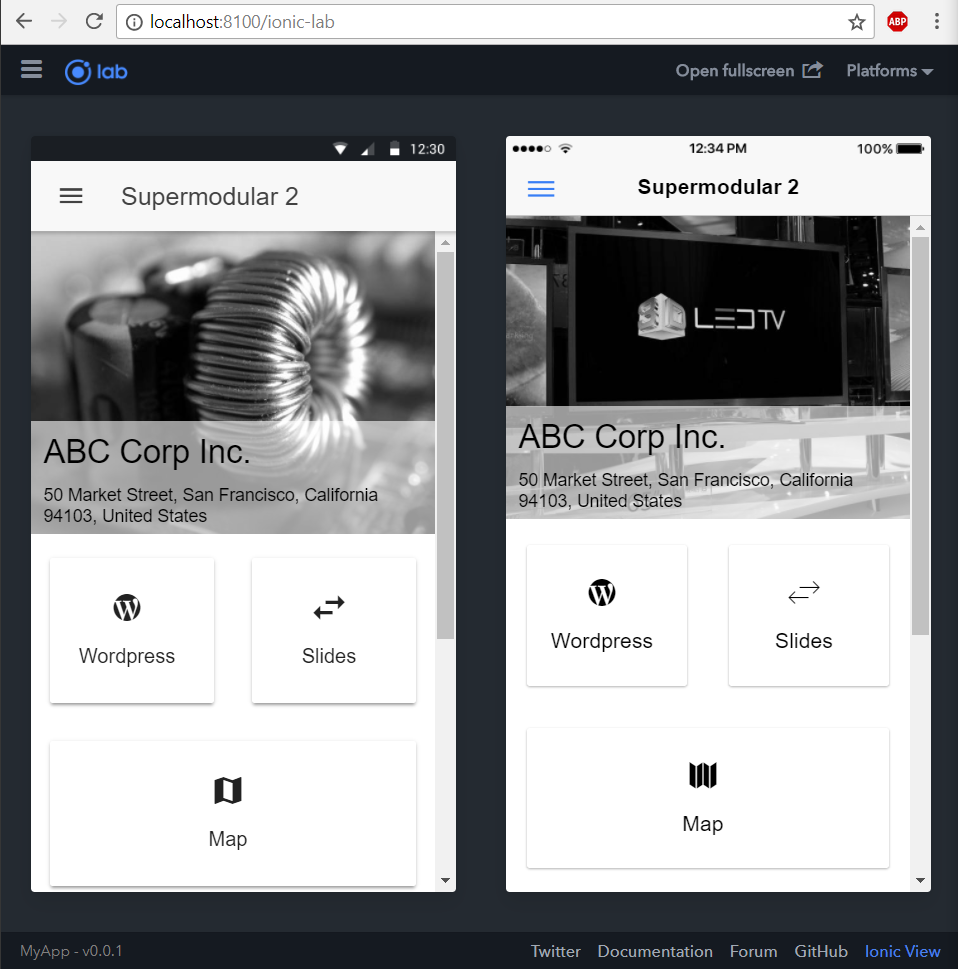 From the Platforms menu you can toggle between the available platforms(iOS, Android, Windows Phone).

We create two folders namely form1, form2 under src/pages. Inside them, we create the files form1.module.ts and form2.module.ts respectively, and copy the following code

Now that we have our modules ready, it is time to add them to our app.module.ts 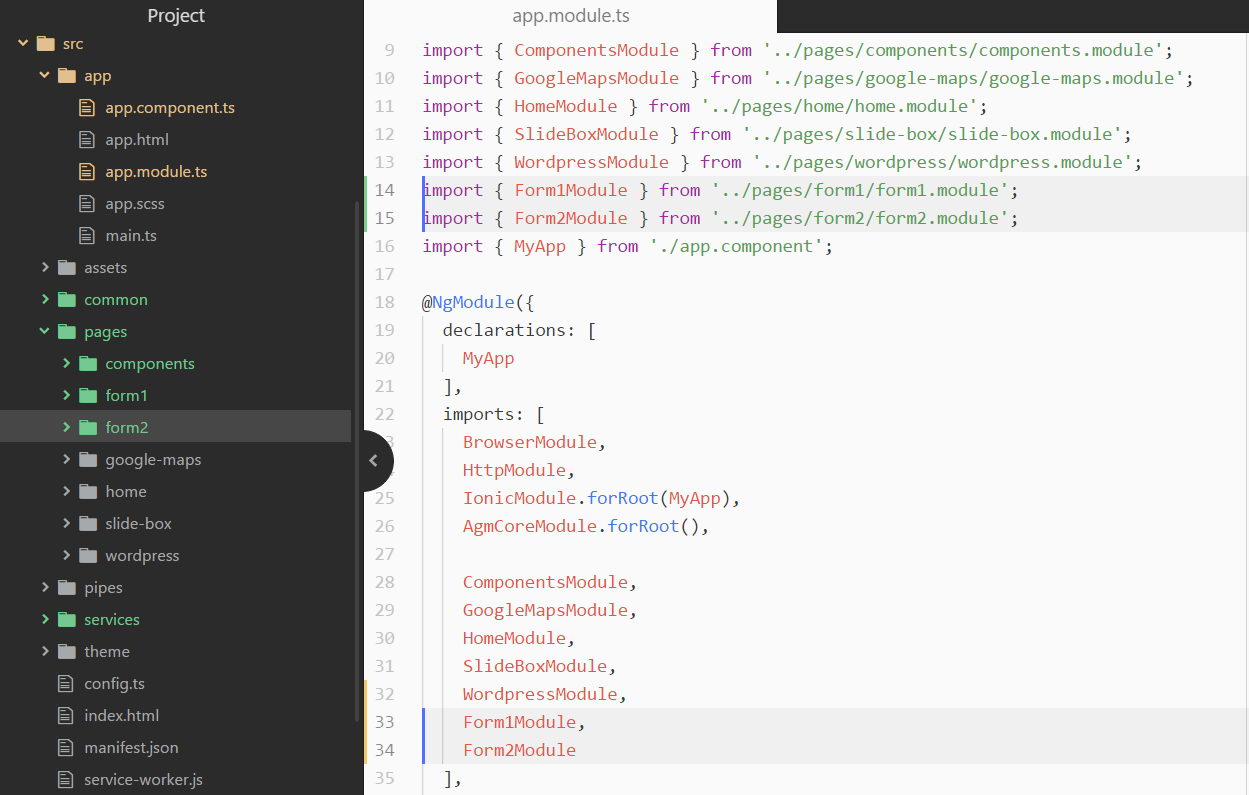 We create the files form1.page.ts and form2.page.ts under src/pages/form1 and src/pages/form2 respectively. These files will be our controllers and match with the modules previously created. In line 14 we create a form instance for binding data to the DOM later. 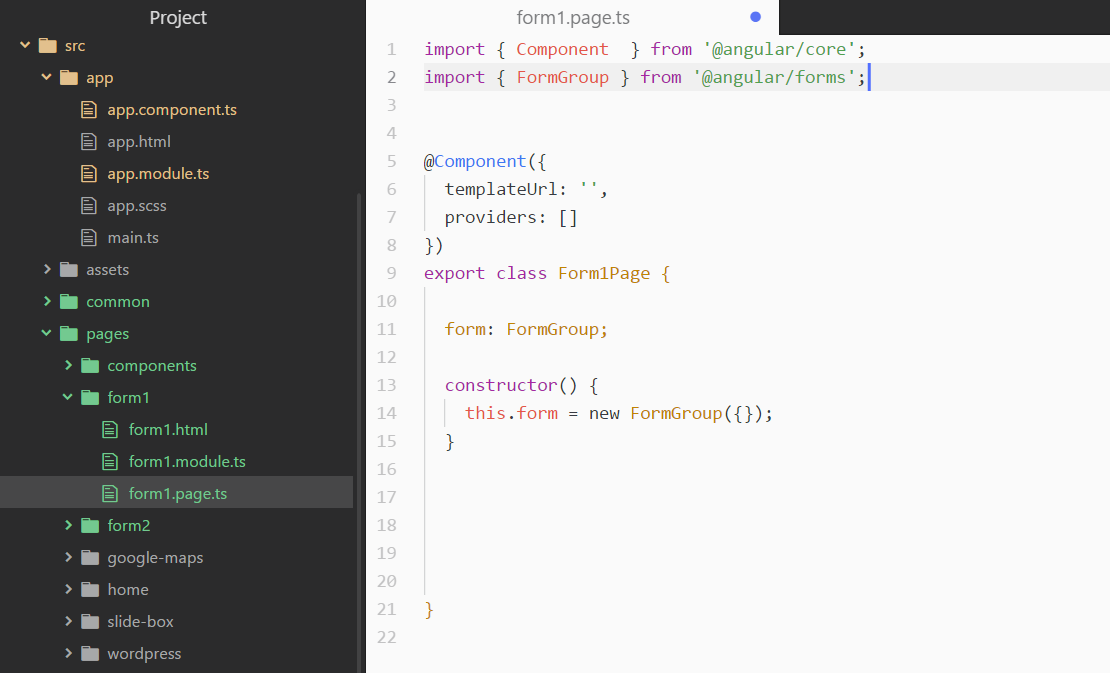 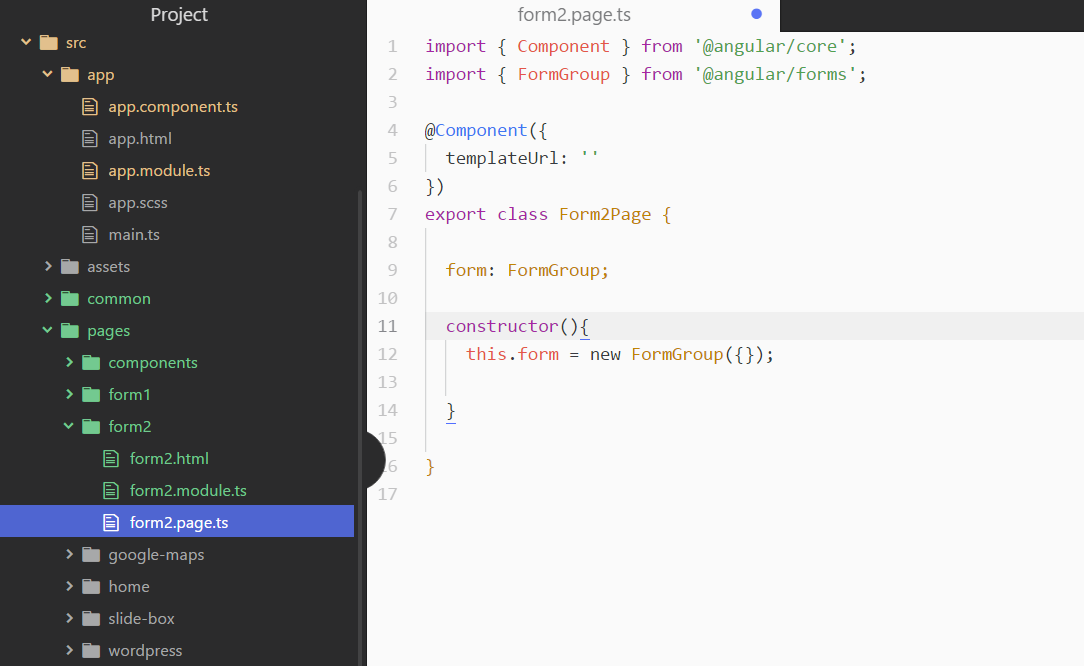 After we have created the controllers, we must connect them with their corresponding modules.
For form1.page.ts, we change form1.module.ts as it follows: 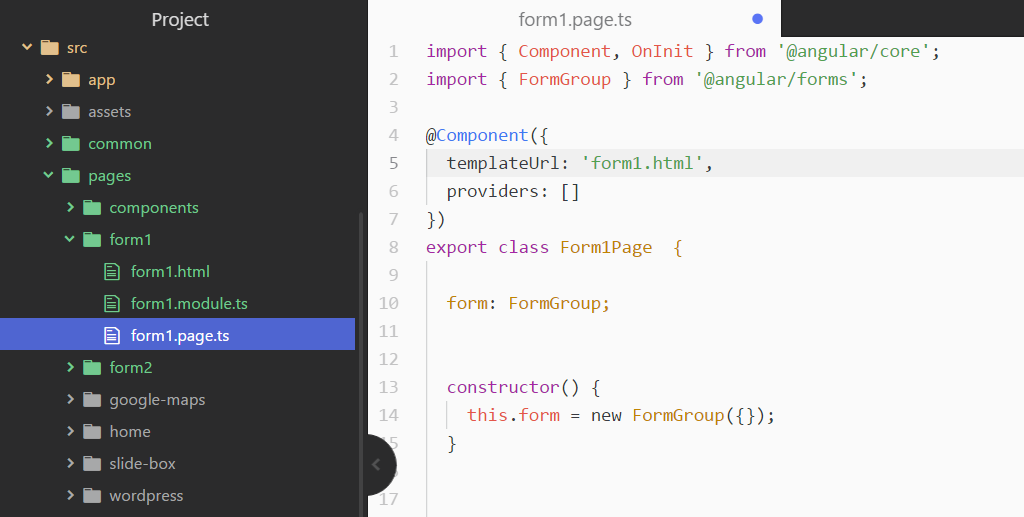 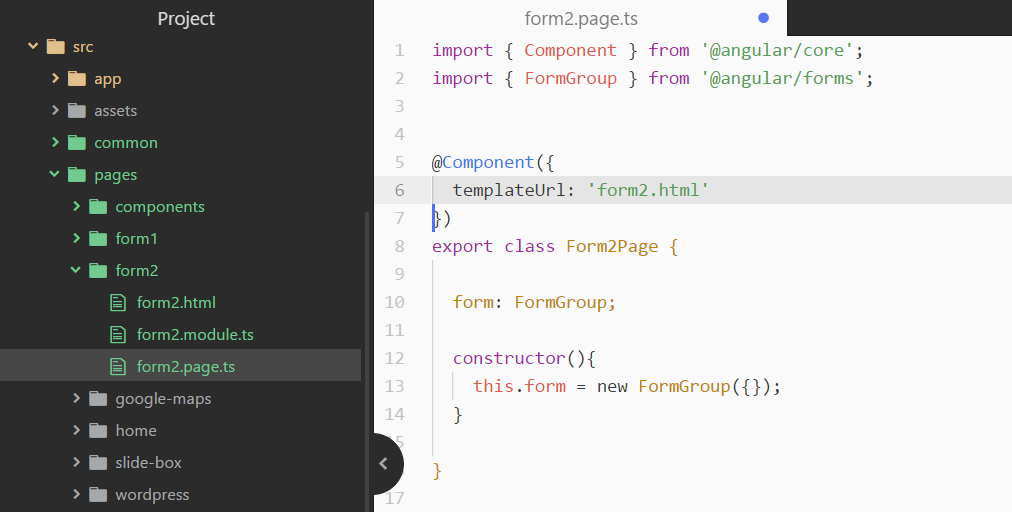 Finally, we add the following code to app.components.ts in order to create two new entries in the side navigation menu of the application. 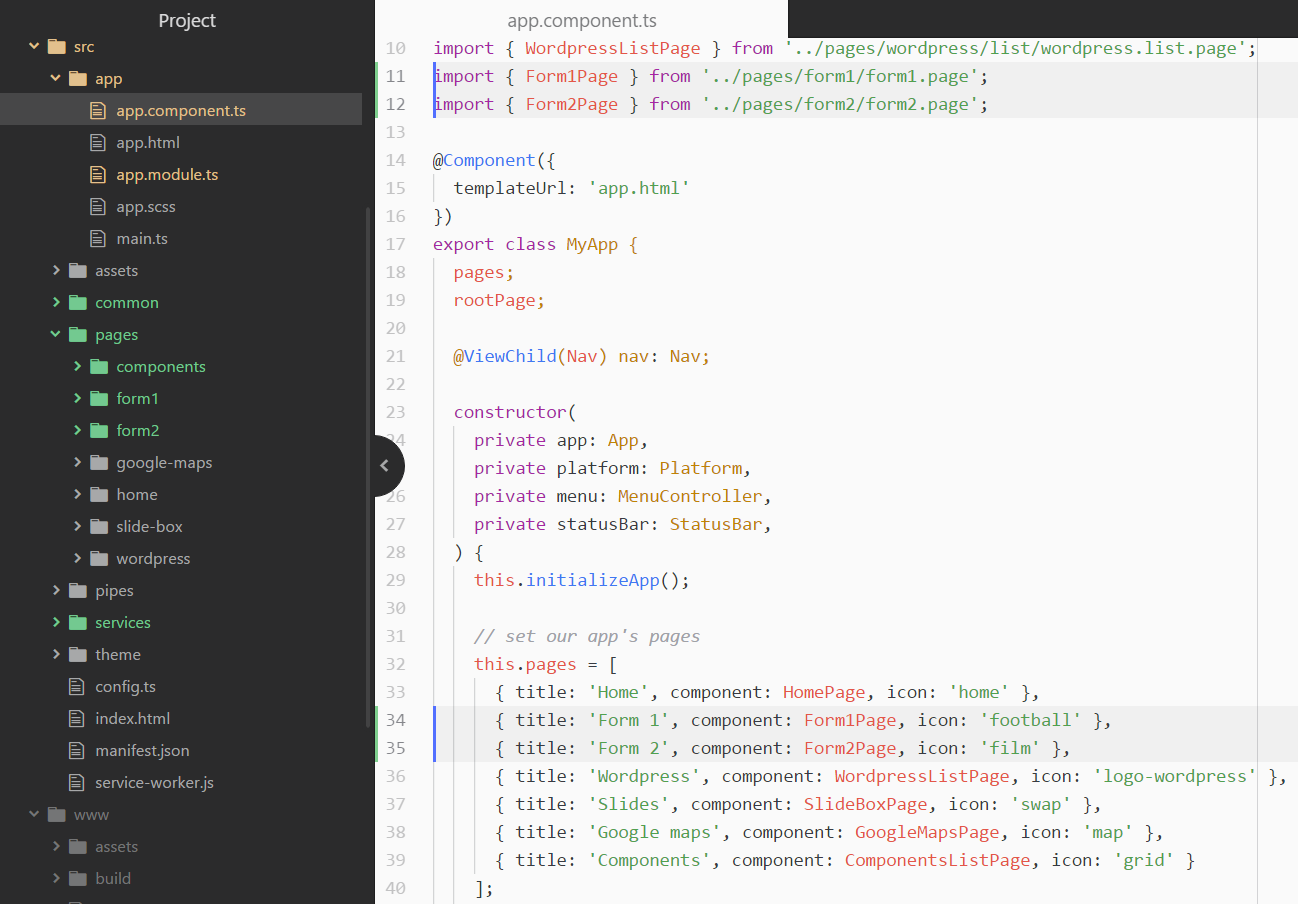 It’s time now to test what we have implemented so far.

At this point the two forms are empty and our Ionic app looks like this: 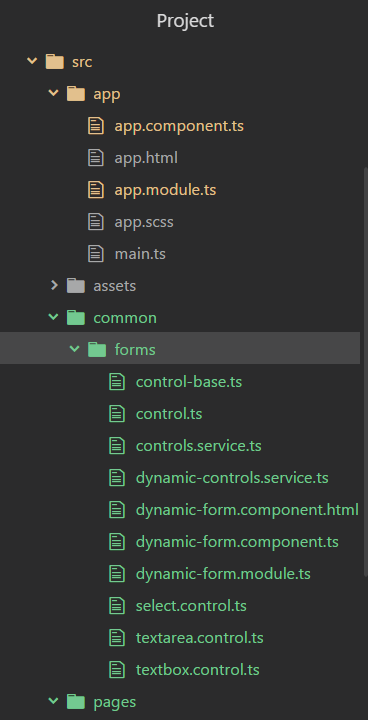 As shown above, 3 types of user input elements are supported:

Finally, we need to connect the dynamic form files with the modules and controllers previously created.

For the first form1:

Respectively for the form2:

An example of a textfield and its properties is shown below:

Then we upload the configuration files to a server (In our example we used Amazon AWS. Any other static web server works just as good).
We created two JSON files with different arrangement of field types. The first describes Football Players and the second describes Movies. They can be accessed through the following links:

Step 7: Getting Configuration Files from the Server

In order to access the configuration files, we created and uploaded to the server, we use a service. Under src/services , we create a file called form-config.service.ts and add inside it the following code. It is a simple HTTP request of method GET.

In the next step, we make the getFormConfig(filename) method available by importing its class FormConfigService.

And for the form2: 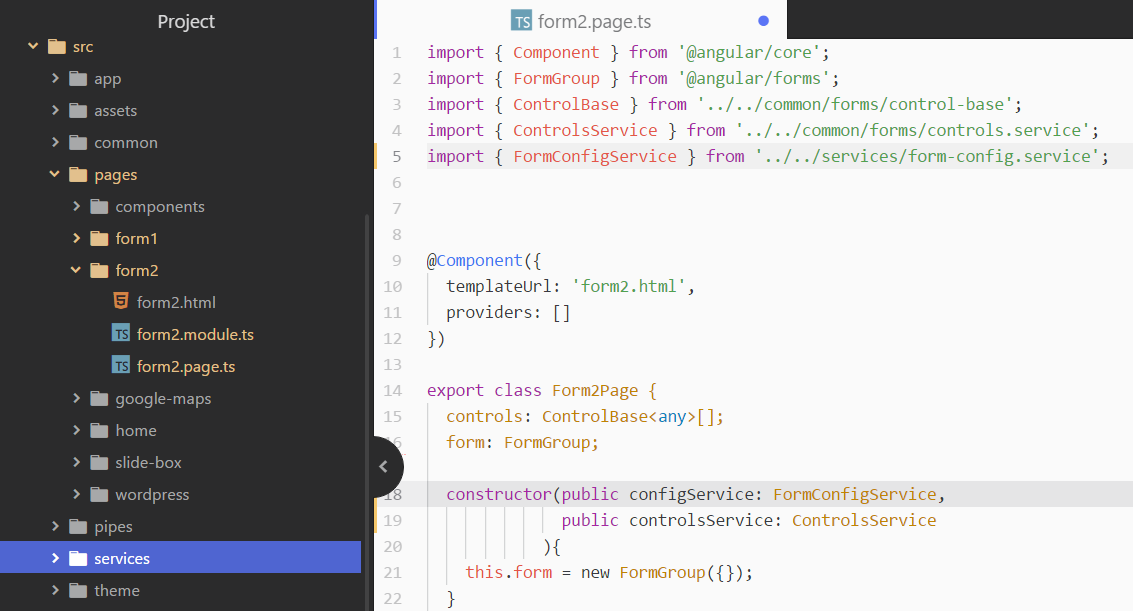 CREATING THE FORMS BASED ON CONFIGURATION FILES

We call the getFormConfig(filename) method from FormConfigService and an Observable is returned. We subscribe to the Observable and map it as a JSON file thus we create the necessary data for our demo form. By putting our code inside ionViewWillEnter(), we ensure its execution upon view entering every time. 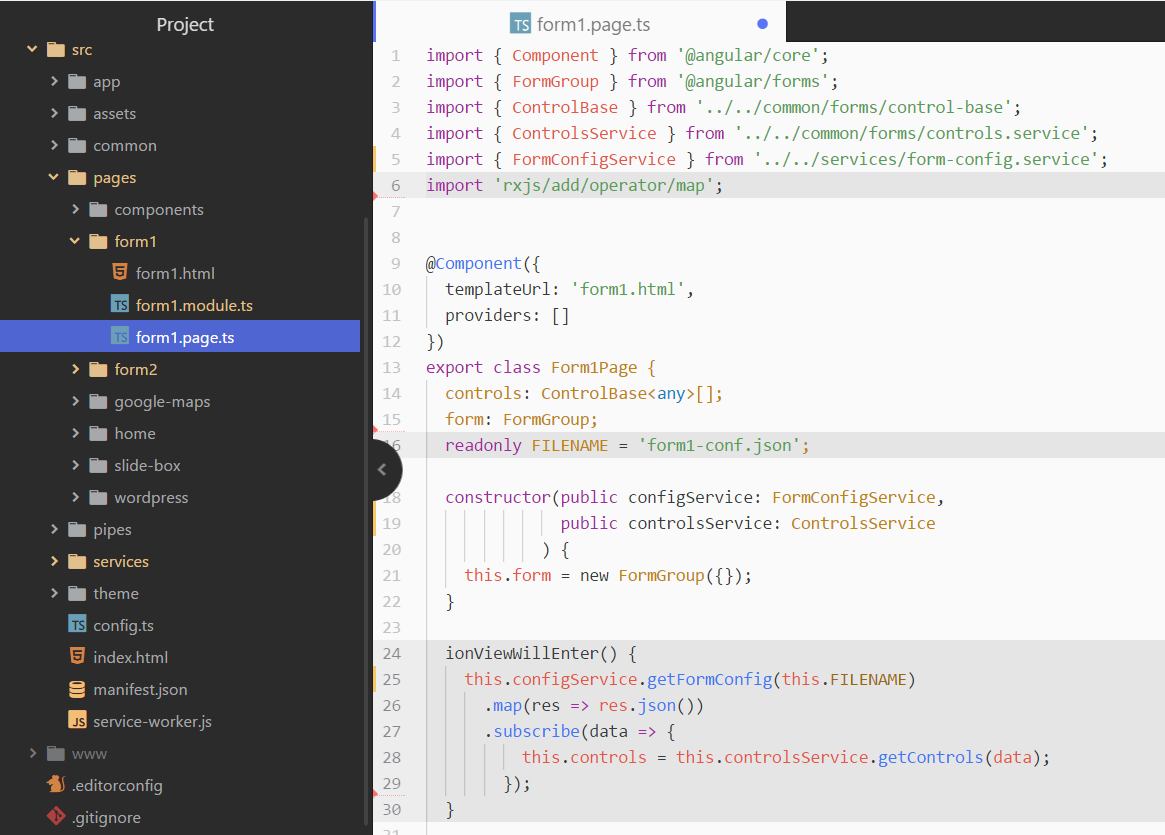 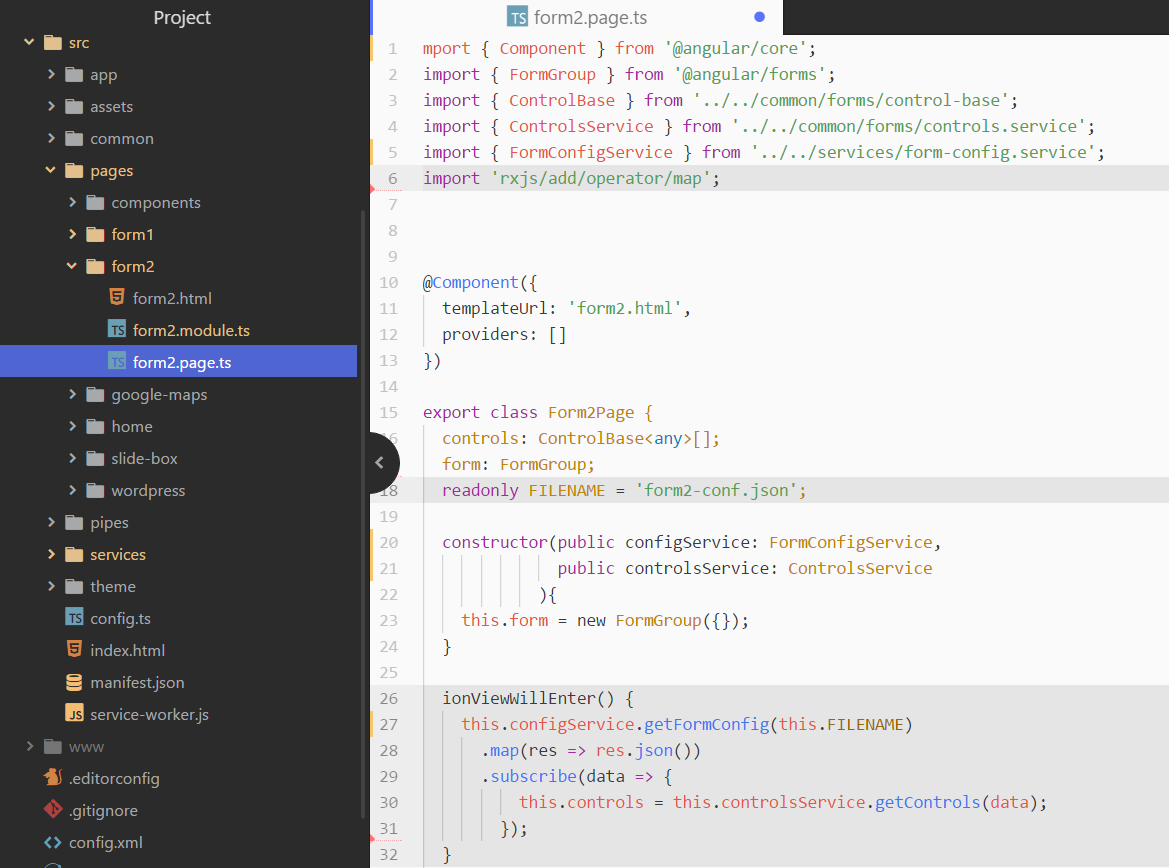 In order to display our forms properly we use the DynamicFormComponent and its corresponding template. Both of these files are located under src/common/forms and they are part of the Ionic Dynamic Forms implementation that we introduced in Step 6. 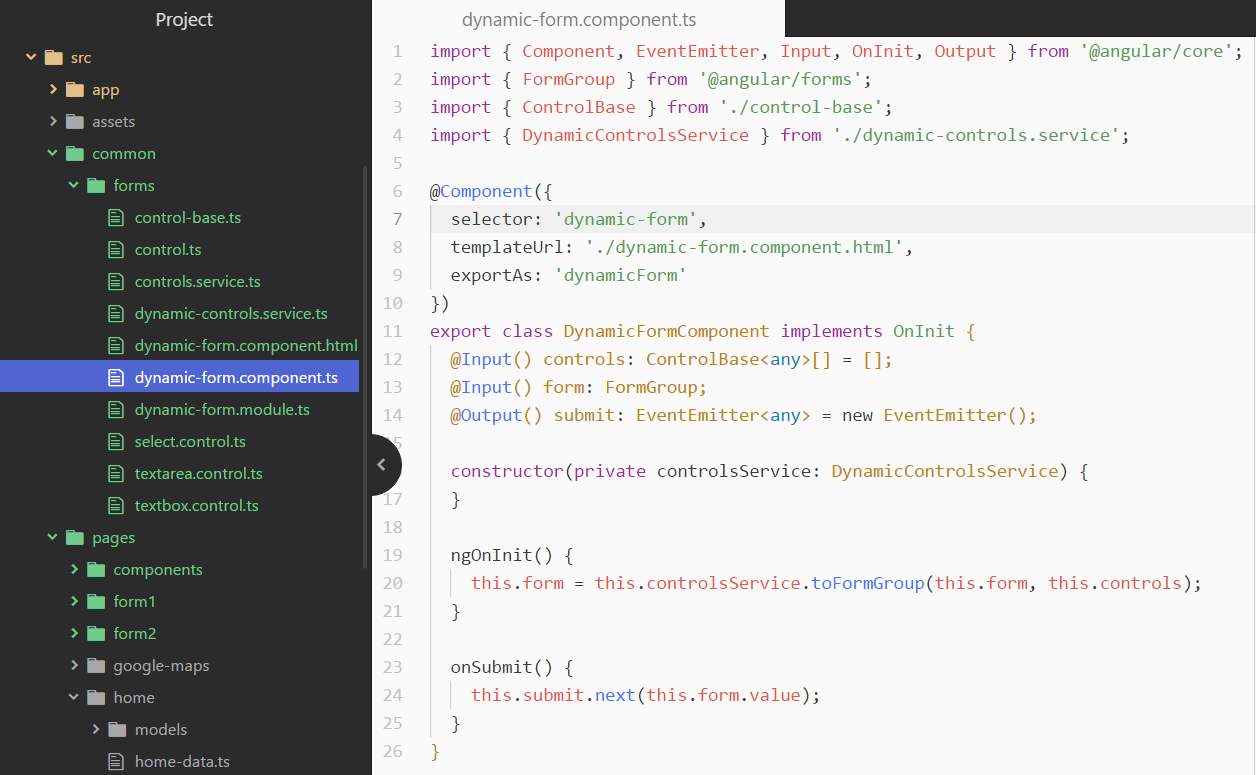 Finally we add the following code to our templates. 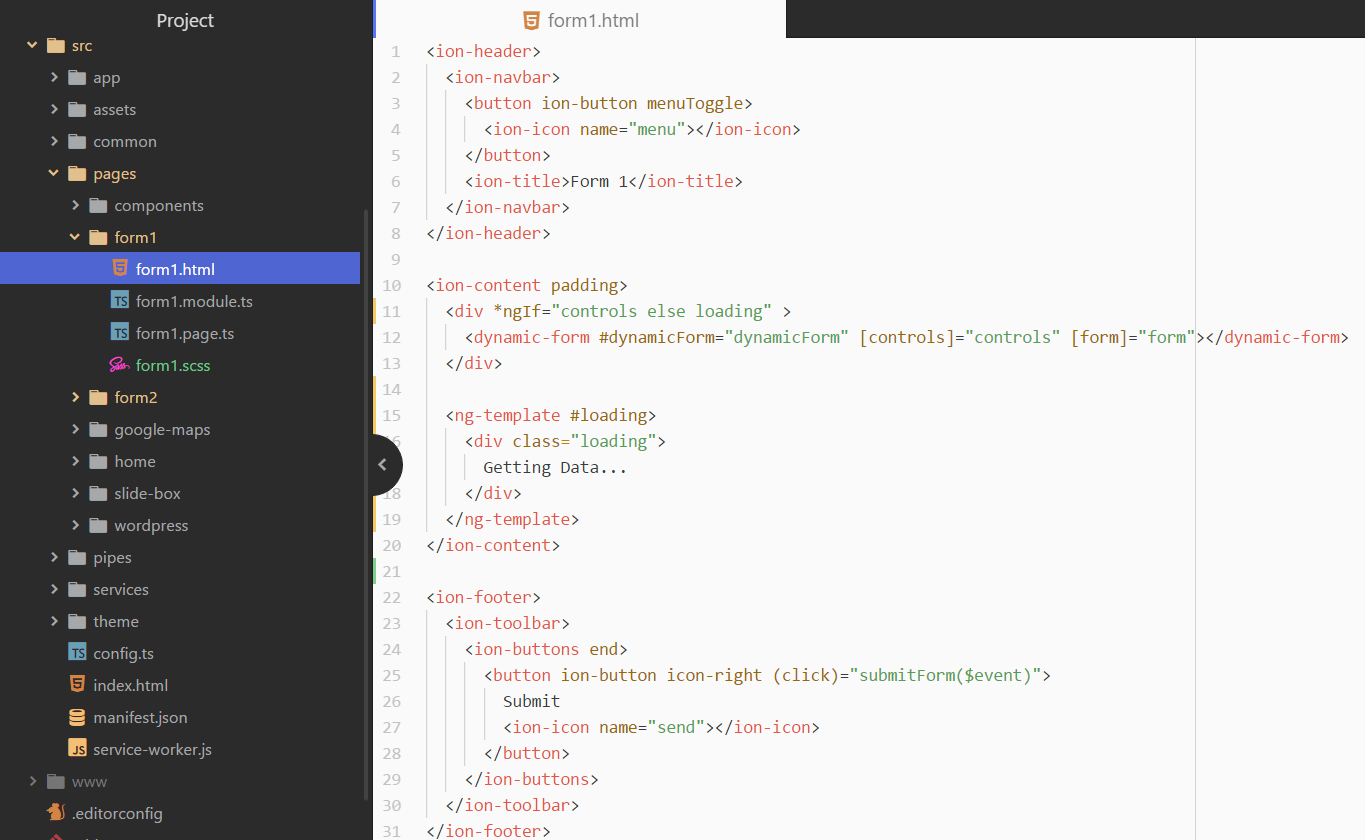 Then we create form1.scss under src/pages/form1 and we add the following code. This is for displaying the waiting screen while data is being retrieved from the server. 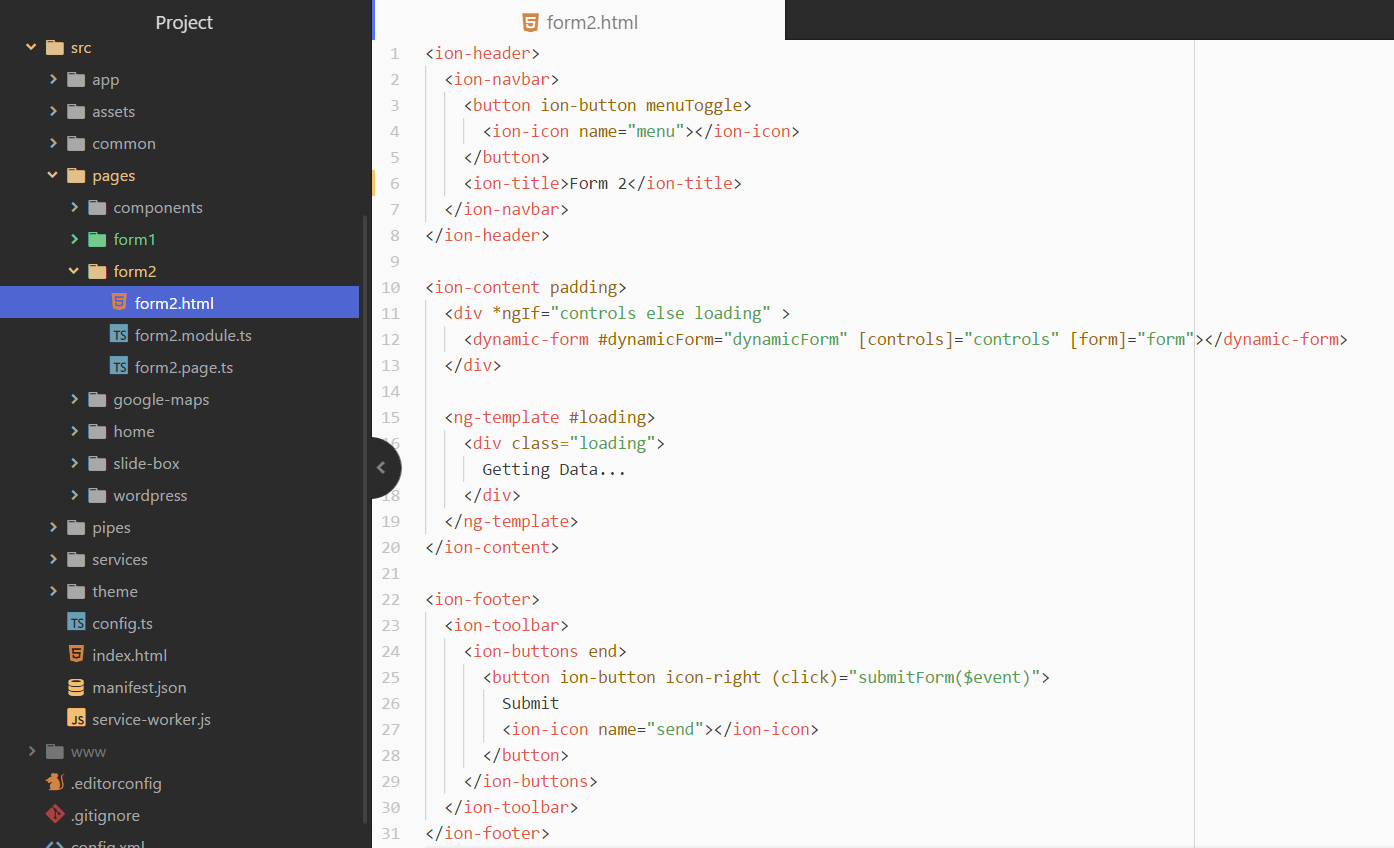 We create form2.scss under src/pages/form2 and we add the following code. 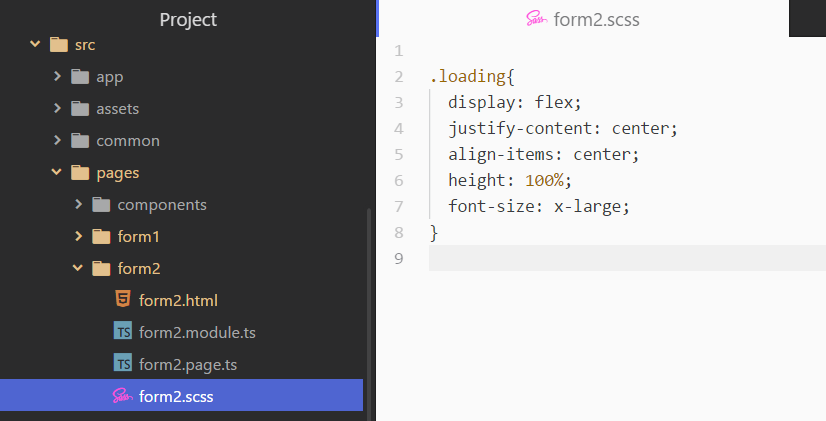 Inside the form templates, we also included a “Submit” button. By clicking it, an Ionic alert pops up with a success message. Also, a “Success” message is displayed on the browser console alongside with the form input values.
In order to listen for changes of the form values, we used the valueChanges() method which is available for FormGroup instances, like form in this case. 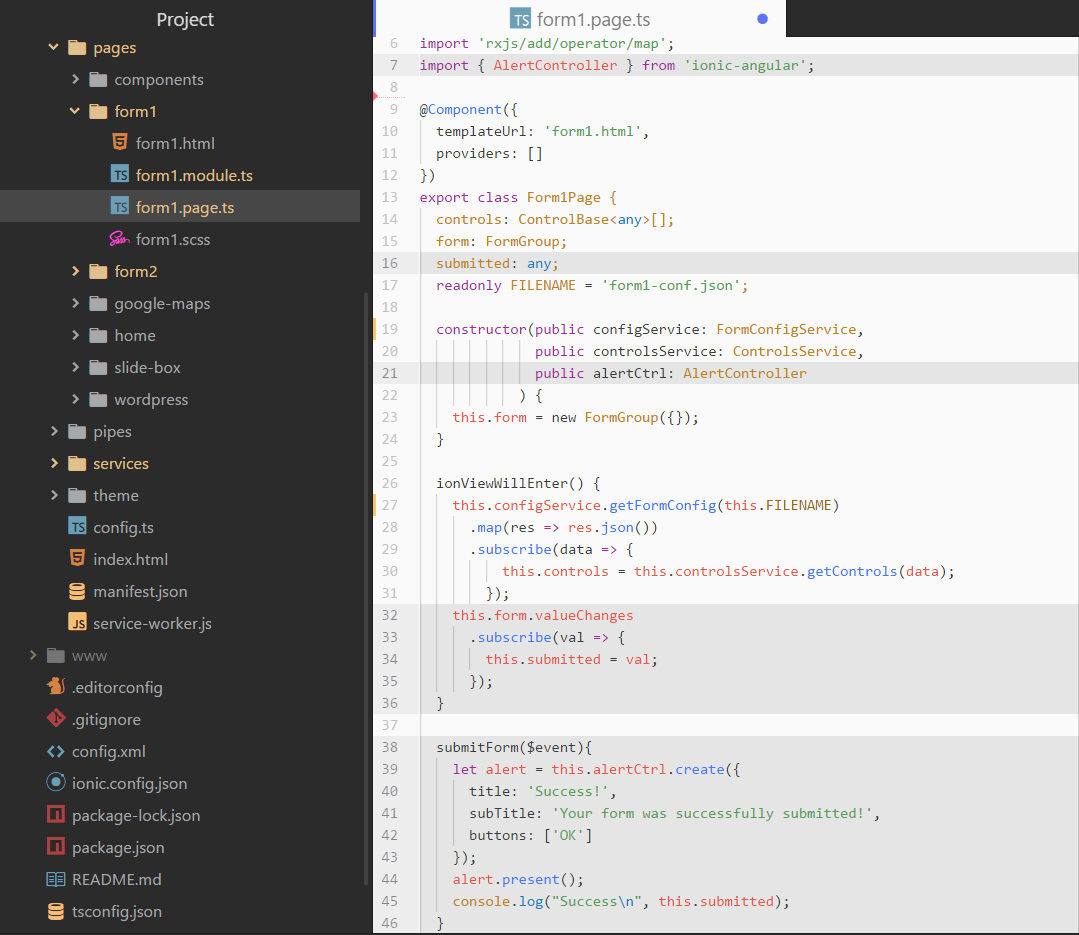 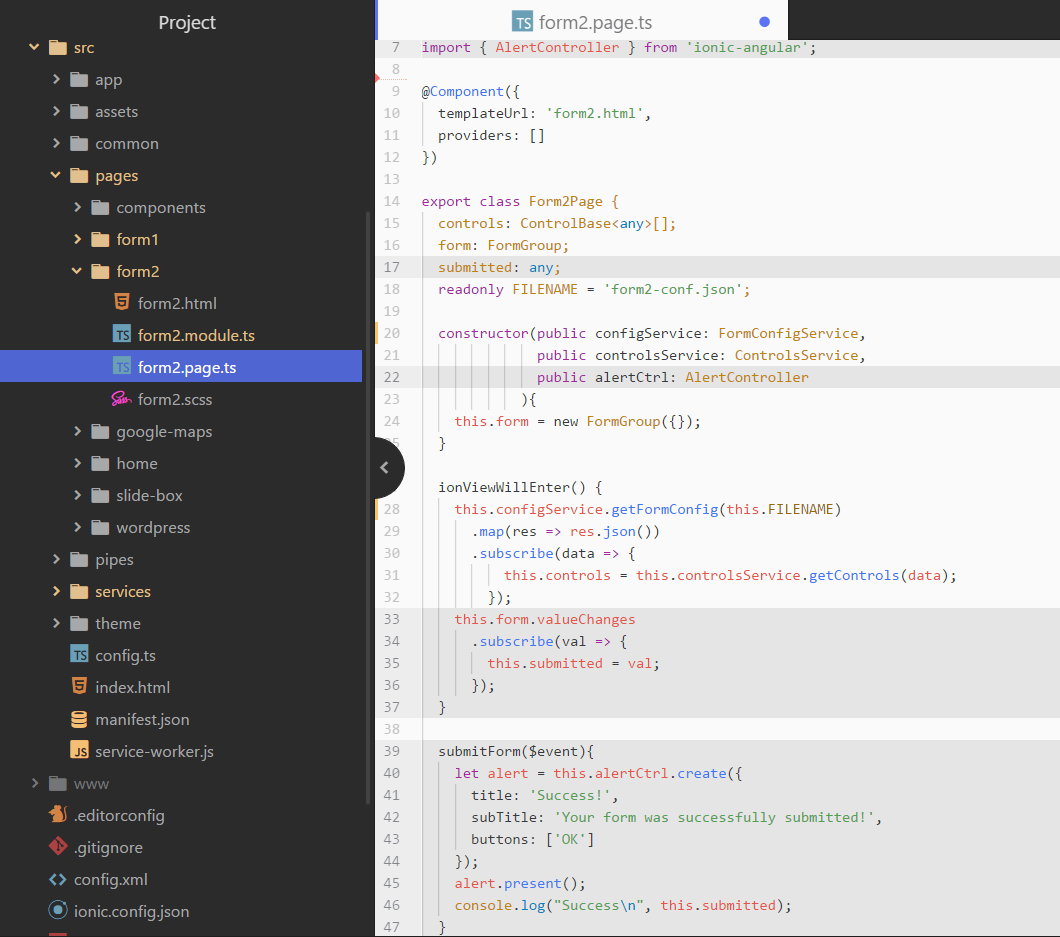 Form 1 is about a football player entry with some trivial attributes. As seen, the “Position” and “Preferred Foot” fields are of type select and “Career Achievements” of type textarea while the rest are text.

Form 2 is a movie form with the “Storyline” and “Cast” fields being textarea, “Genre” being select and the rest text. 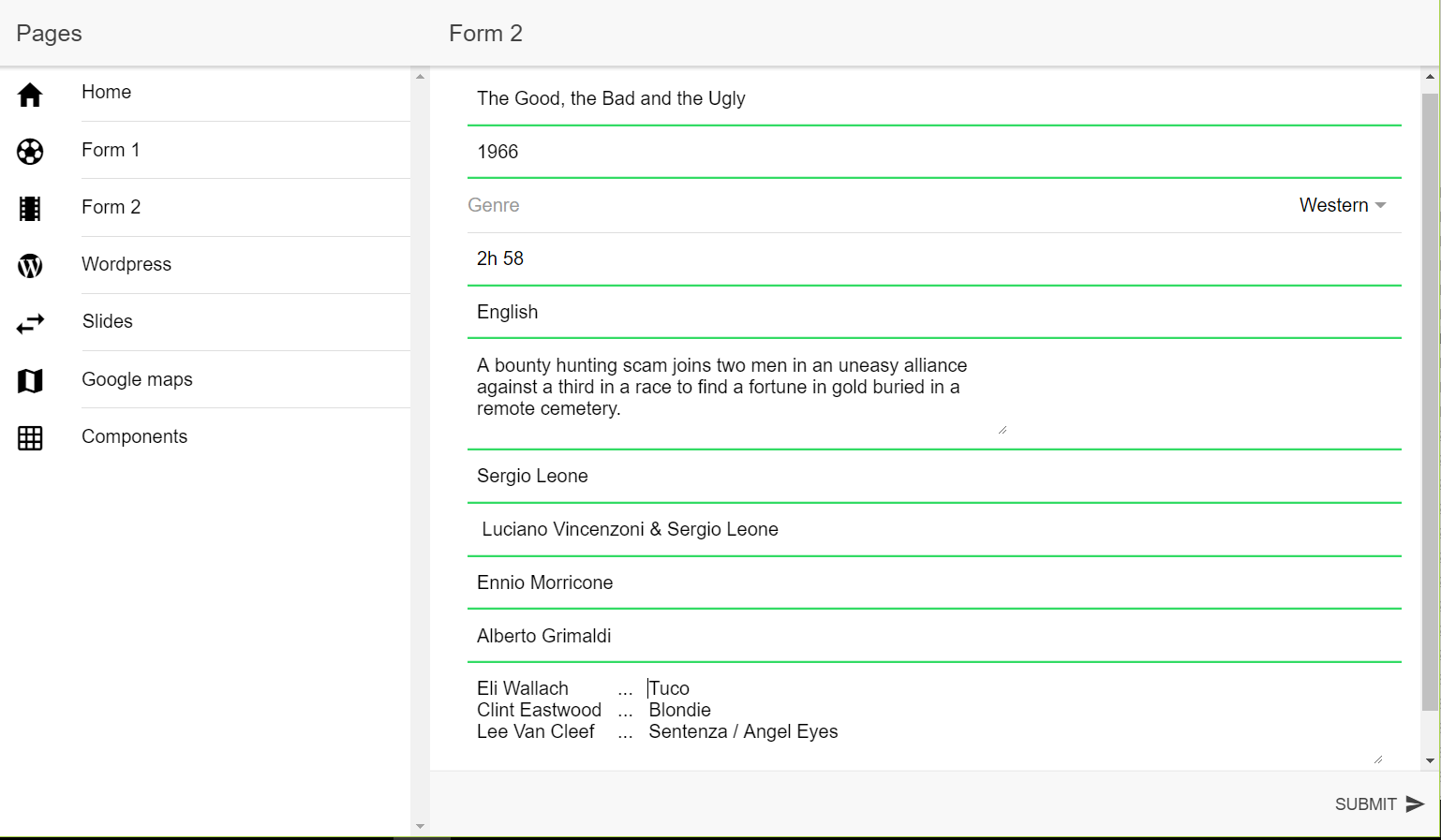 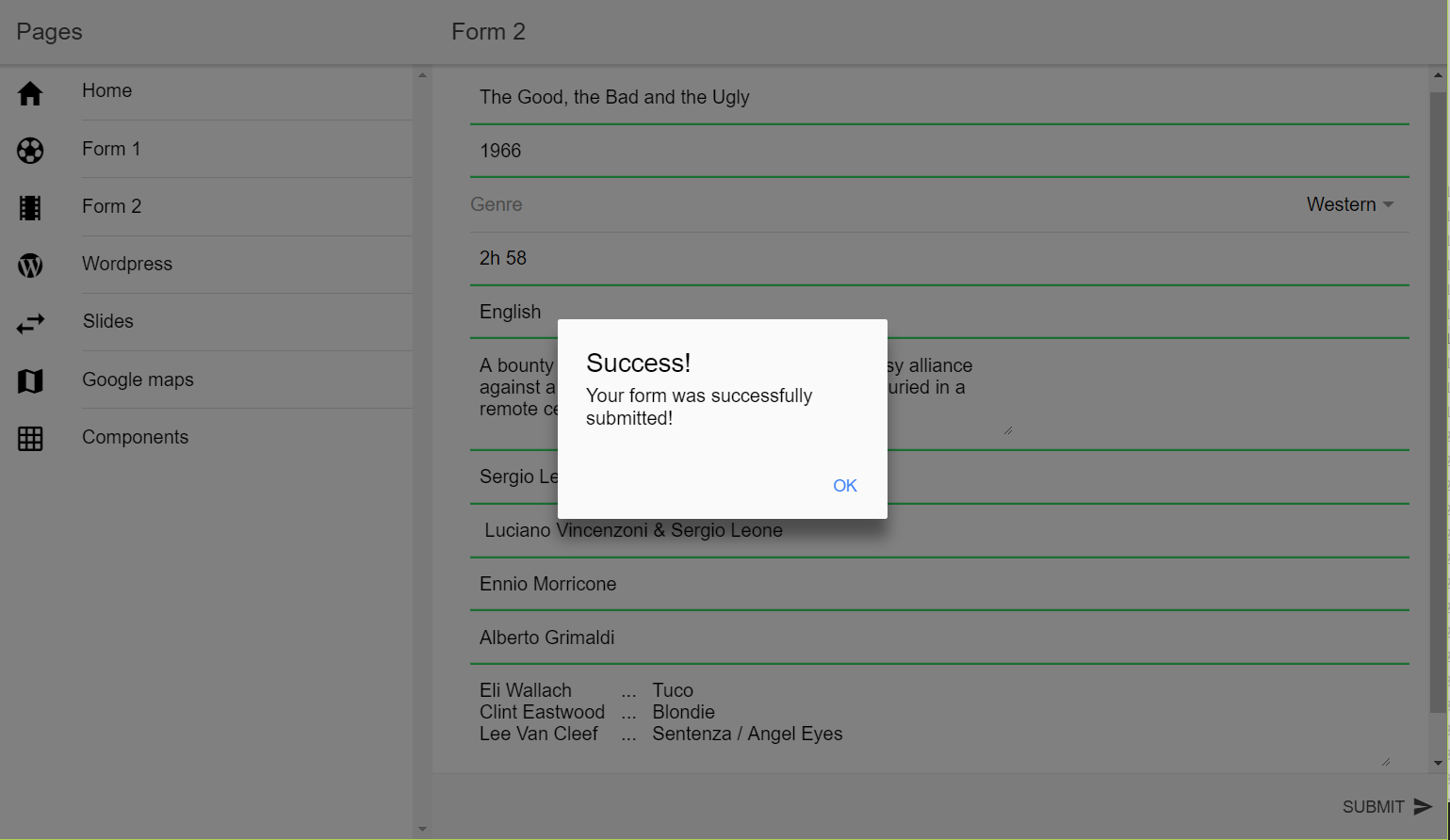 Join our list and sing up to get early access to our latest news and free tutorials about Ionic.
Home Blogs admin's blog How to use Angular Dynamic Forms in Ionic Applications
AppSeed
Mobile application templates